In the fall of 1943, the 207. Sicherungs-Division was occupying a very broad area of northwest Russia, crossing over the border into Estonia. This document, from the divisional war diary, dated 27. September 1943, lists every sub-unit assigned to this Division, and the exact location to which each unit was deployed at that time. Of particular interest is that for many of these subunits, the specific task assigned to each unit is listed. Grenadier-Regiment 374 was at that time on the front. The various parts of Sicherungs-Regiment 94 were assigned tasks including railway protection, area security, coastal protection, and anti-partisan activity. Parts of Landesschützen-Bataillon were assigned to be static guards, prisoner of war guards, and also railway protection duty.

This is part of a Divisional report dated September 1, 1943. It lists the German and captured small arms of the Division at that time, as follows:

The reliance on Russian weapons in many subunits of this Division created problems with ammunition supply. This report from Sicherungs-Regiment 94, dated December 8, indicated that the amount of ammunition for the Russian submachine guns was 10,000 rounds short of where it was supposed to be. There was only one magazine per submachine gun. One Kompanie of the Regiment had no ammunition at all.

For a long while in the first part of 1943, partisan bands controlled the southern part of the area of Slavkovichi, in north-west Russia. Owing to a shortage of manpower, intimidation of local civilians, and partisan blockades, the Germans were not able to learn details about the composition of these bands, or the location of their headquarters. “Unternehmen Maikäfer” (Operation June Beetle) was an operation tasked with seeking out, attacking, and destroying these bands. The German units involved in this operation were “Gruppe Hofmann” and “Gruppe Spemann.” These formations were composed of a wide range of German security units, including many Eastern volunteer units. The operation began on May 12, 1943, and was regarded as a success, as it led to high enemy losses and the destruction of some partisan units. The enemy losses from this operation combined with other German offensive operations in that area at that time totaled 513 killed and 110 taken prisoner, with correspondingly high numbers of wounded and a large amount of weapons being captured.

The Korps order for “Unternehmen Maikäfer” stipulated that the participants in the operation be uniformed as follows:

Fritz Gleich fought in WWI. In 1944, he was called up again, and assigned to a Landesschützen unit in Eger. By this period of the war, film was scarce, an relatively few soldiers were able to take photos. Gleich, however, did have film; these photos are from his album.

These photos offer interesting insight into uniforms in use at that time. For example, in the “recruit training” group photo with visor caps and Waffenrock dress tunics, it can be seen that most of the tunics have been converted by removing the piping and adding field type insignia, while other tunics remain unconverted. The mix of obsolete an new pattern kit in these photos in general is also notable. Reichswehr-era M33 boots seem predominant.

Fritz Gleich survived the war and assembled his album after 1945.

The unit ID and date are indicated by markings on the back of the photos. Feldpost number 22621E was at this time used by 4. Kompanie, Landesschützen-Bataillon 313.

In May on 1942, this unit was assigned to Korück 532 of the 9. Armee, part of Heeresgruppe Mitte which was at that time in central Russia.

The soldier in these photos wears a mixture of standard issue Wehrmacht gear together with obsolete and captured elements, a combination so typical for soldiers in Landesschützen and Sicherung units. The collar Litzen on his prewar M36 tunic are applied directly to the collar without backings, suggesting this is a reissued tunic with replaced insignia. The helmet is the standard issue Wehrmacht type with matte field gray paint, but the lace-up tall boots are an earlier, Reichswehr pattern. The Gewehr 98 is a WWI pattern rifle, here used with a corresponding 1909 pattern ammunition pouch, obsolete before the start of WWII. He is wearing a captured prewar Polish Tornister pack. Additional field gear visible in the photo includes a bayonet and entrenching tool, a gas mask canister with gas cape bag worn in the front in the early war style, a bread bag, and a Zeltbahn shelter quarter strapped to the Tornister. The weight of the equipment on the belt is carried by the internal suspenders inside the tunic. The field cap tucked into the belt is adorned with the white branch piping worn by Landesschützen units. The tunic is adorned with a single award, a civilian SA Sports Badge.

Many Landesschützen and Sicherung units were irregularly equipped in this manner, as they had a low supply priority. Even at the start of the war, Germany faced shortages of raw materials and other logistical hurdles that made it hard for them to equip the millions of men needed for their armies. Front line combat units got the best and newest material, while rear area units that also had an important role in maintaining order in the occupied areas got the short end of the stick. A May 1941 report in the war diary of the 281. Sicherungs-Division described the situation: “The “alert unit” [Eingreifgruppe], that was transferred from Infanterie-Regiment 368 of the 207. Infanterie-Division, is well equipped and armed. This is in contrast with the units assigned to the Division in the month of April, which only barely met requirements; above all the Landeschützen-Bataillonen, Feldkommandanturen and Ortskommandanturen. The equipment is for the most part very deficient and incomplete; the armament is frequently inadequate and furthermore is varied with foreign small arms (Czech, Polish, Dutch, French, Belgian, Norwegian, and Austrian rifles, carbines and pistols); the equipping with horse-drawn and motorized vehicles of all types is, almost without exception, completely insufficient in both type and number for the various expected tasks, and especially in regard to the motorized vehicles, the quantity, condition and type (foreign-made, without spare parts or tires) leaves much to be desired. Very many units, especially the Feld- and Ortskommandanturen intended to be used in static roles, as well as the similarly utilized Landesschützen-Bataillonen and Wach-Bataillonen, are in no way equipped for the anticipated long and distant marches. Even the Divisional command initially had not one single vehicle it was supposed to have.”

Translated document from the war diary of the 285. Sicherungs-Division. 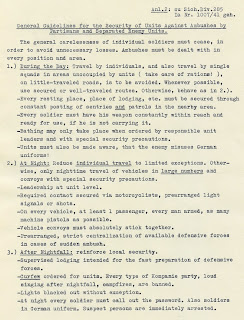 Translated original report from October 1942, includes a list of weapons and clothing found in a partisan camp. 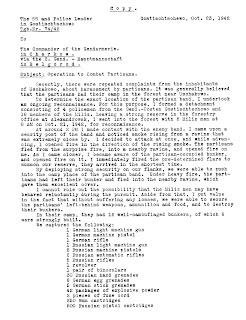 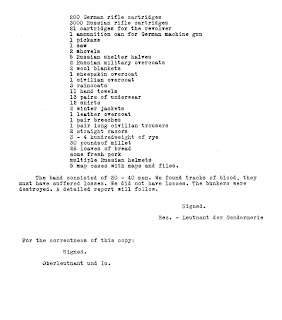 Willi Hermann was born near Dresden in 1906. He worked for a textile company. In 1939, he was given a military physical, deemed to be fit for duty and assigned to the “Ersatzreserve I” category, which included males under the age of 35 with no military training. He was drafted in 1941, at the age of 35, and after barely more than one month of training, he was assigned to Landesschützen-Bataillon 464. Initially, he was trained on how to use the Gewehr 24 (t) and MG 26 (t), these were the German designations for the Czech VZ24 rifle and ZB26 machine gun. It’s probable that Hermann was trained on the use of these Czech weapons because he trained to serve in rear area type units that would have been armed, at least in part, with obsolete and captured weapons. On November 5, 1941, Hermann was transferred, and assigned to a Marschbataillon, a unit for soldiers in transit. Almost 3 weeks later, he officially joined his new unit: Landesschützen-Bataillon (later Sicherungs-Bataillon) 869, at that time active in Russia in Army Group North and attached to the 281. Sicherungs-Division. He served with this unit for 11 months, during which time he participated in security duties and also fights against partisans. For his service with this unit in Russia in the winter of 1941/1942, he was awarded the “Ostmedaille” campaign decoration. In August of 1942, after serving in the Wehrmacht for more than 14 months, Hermann was promoted to the rank of Gefreiter. On October 15, 1942, the Sicherungs-Bataillon of which Hermann was a part, was redesignated, and became the I. Bataillon of Sicherungs-Regiment 107.

On November 12, 1942, strong partisan bands emerged in the area 28 kilometers southeast of Salkowitschi*. Hermann’s unit, 4. Kompanie, Sicherungs-Regiment 107, was at that time based in this area, in the locality of Machnowka. The next day, November 13, Hermann’s unit made contact with a strong partisan band in the area of Chulpowo, 10 kilometers north-northeast of Machnowka. By November 15, the operation was over. In this combat, 4./Sich. Rgt. 107 suffered 3 men wounded, and one officer, 3 NCOs, and 10 enlisted men killed- among them, Willi Hermann. The officer killed in that action, was the man who had certified the promotion entry in Hermann’s Wehrpass. The Wehrpass records that Willi Hermann died in a place called Ssiwkowo, and was buried in Ostrow. He was 36 years old.

Willi Hermann was mourned by his wife, his mother, and the two children he left behind. He was one of 3.4 million German soldiers killed in WWII.

*I have retained the German spelling for all place names. 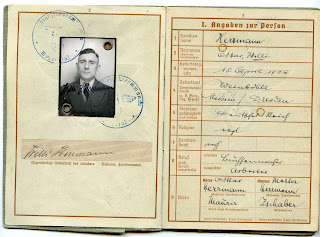 List of the units Hermann served with in WWII. 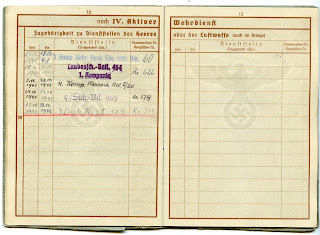 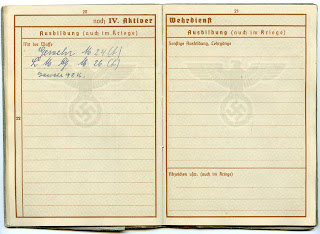 Page 22 records Hermann’s rank promotion. It is signed by Leutnant Grüssinger, who was killed in the same action as Hermann. Page 23 records the award of the “Winterschlacht im Osten” medal. 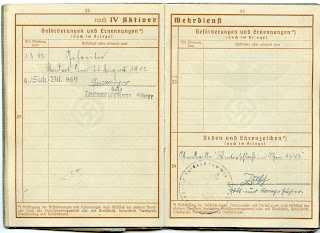 List of all the campaigns Hermann was a part of. From November 11, 1941, through December 31, 1941: Securing the operational area and fights against partisans, with Army Group North. January 1, 1942, through November 13, 1942: Action against the Soviet Union. 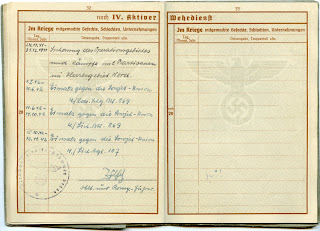 This entry records the details of when and where Hermann was killed, and where he was buried. 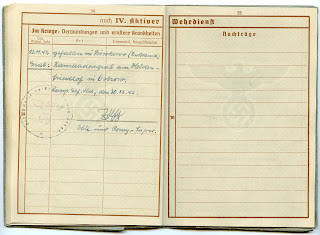 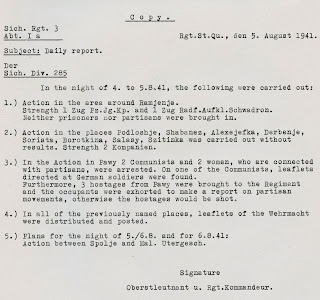