The link between German soldiers serving in the Wehrmacht and loved ones at home during the war years was the military mail system, Feldpost. Feldpost was regarded as crucial for morale and in Wehrmacht supply lines, it was regarded as a higher priority than any form of supply with the exception of ammunition. Many millions of letters were sent through the Feldpost system during the war. Writing and sending letters and receiving news from home through the mail was an experience common to virtually every Landser.
An immeasurably vast array of paper and envelopes were used for Feldpost during the war. By 1944 paper was often in short supply and old envelopes were being turned inside out for reuse. Stationery from occupied countries like France and Italy was used, in all sizes and colors. Most envelopes were made from a rough natural-colored paper, brown and blue paper was also common. Soldiers were issued or could buy plain paper and envelopes and also pre-printed letters and cards formatted for Feldpost mailing. We have reproduced a number of these, below are links where these can be downloaded in PDF format, ready to print.
These first two are simple postcards. They were printed on one side only, the address side. The other side was blank and would be used for the message. These were printed on thin, flimsy card stock that was easily creased.

Feldpost Card 1
Feldpost Card 2
Here are 3 folding letters. These were generally gummed around the edges so they could be sealed, like the flap of an envelope. This first one was printed on thin, light brown paper.
Feldpost Letter 1
This one was printed on thin gray paper. The area that was gummed was marked on the front, to open the letter the recipient could trim off the gummed part.
Feldpost Letter 2
This last one was probably a type that soldiers had to purchase. There is a motivational quote from the author Ernst Jünger on the back: “Courage is the living fire that armies weld.” It was printed on better paper than the others, smooth, with a slight blue tint.
Feldpost Letter 3
Of course, printing out the blank stationery is the easy part of having realistic mail for living history. Filling out the letters is more of a challenge. To help with this, here is a quick guide on how the addresses were written on Feldpost letters. The images are scans of letters in a member’s collection. Firstly, some letters written from home to soldiers. 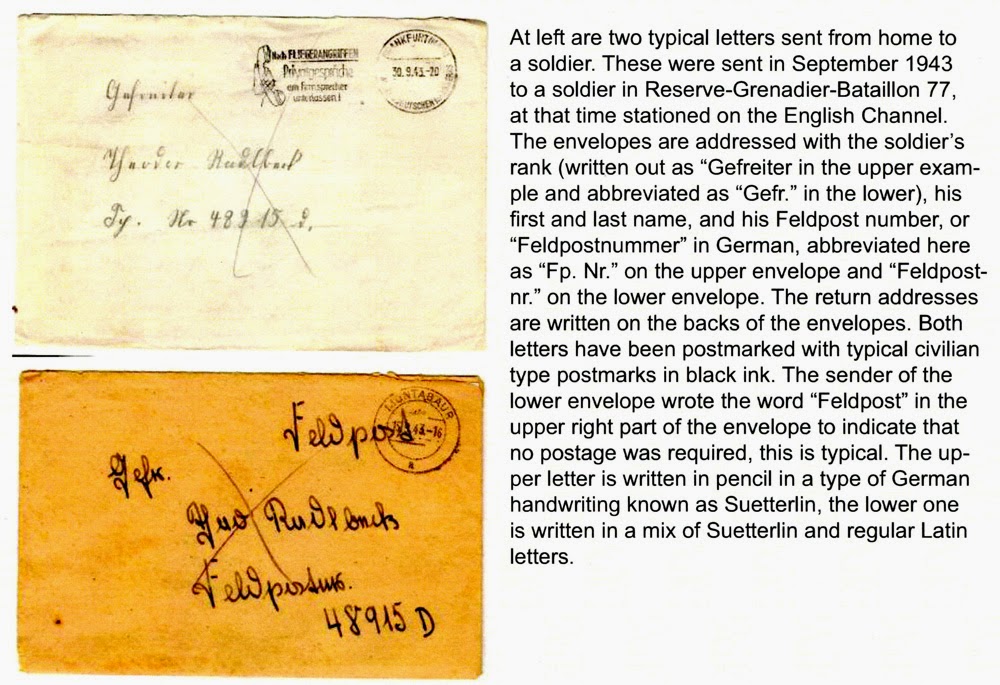 These letters were sent to soldiers by other soldiers serving in different units.

Here are some letters home, written by soldiers. Note that in the addresses, the town or city name is the second line in the address, the street address is the third line- the reverse of the way this is done today.

People in the 1940s wrote with fountain pens or with simple dip pens. Ink was in short supply and people used what was available, mostly black, blue or blue-black, sometimes watered down to save ink. For soldiers in the field, the most common writing instrument was probably a simple pencil.