Staying warm in cold weather, especially during winter nights, is a problem as old as mankind. For winter deployments, we often struggled with ways to heat our 8-panel Zelt (in a period-correct way). A short clip in a wartime German Wochenschau newsreel film provided an answer. In this clip, a Wehrmacht-issue “Jerry can” fuel container was shown inside a Kübelwagen. The can had been modified into a stove, to provide warmth. Here are screen captures from the film. 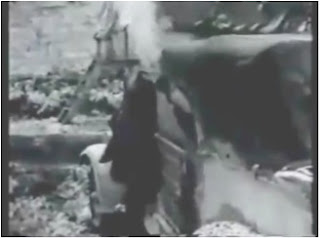 Here, the stove’s exhaust pipe, emitting smoke, can be seen sticking out of the side of the vehicle. The next photos show a soldier removing ash from the modified “Jerry can.” 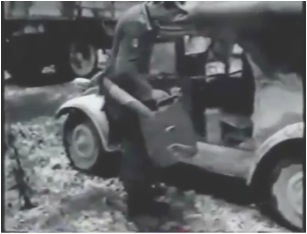 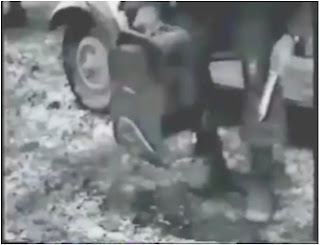 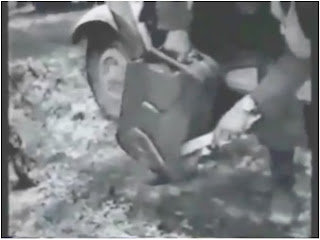 This was something we knew we could replicate for our 8-man zelt tent. The photos below provide a detailed explanation of our project.
-The first step was turning a Jerry can into the main body of a stove. The font of the can had to be cut out, and replaced with a fabricated hinged door. A latch was also included to keep the door shut. 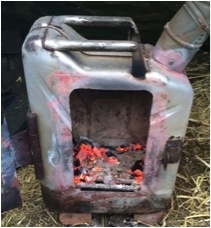 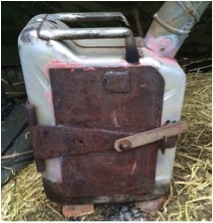 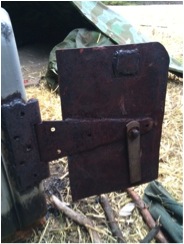 -Internally, a “grill” had to be made, to allow for ash to fall away from the fire itself.  This can also be seen in the first photo above.
-On the rear side, another smaller door had to be created to allow for both ventilation/air circulation, and to provide a means of removing smaller ash that fell to the bottom. A latch was also included on this door. 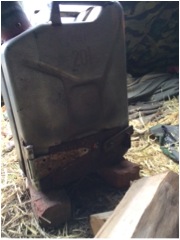 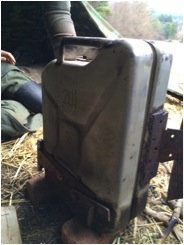 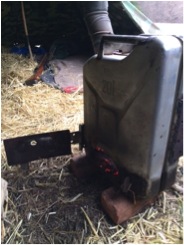 -Next was creating sectional exhaust pipes, with a flue, that exited the mouth of the Jerry can. 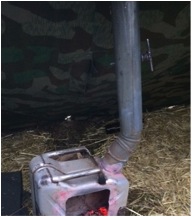 -An obvious concern was burning the zelt where the pipe exited the tent. The pipe can get very hot, and we needed a way to prevent contact between the zelt panels, and the pipe itself. Creating a fiberglass insulator and support panel solved this problem. No part of the zelt comes in contact with the hot exhaust pipe. We needed to tie up the sides of the zelt, because we could not button it together anymore (e.g. where the pipe exited the tent). 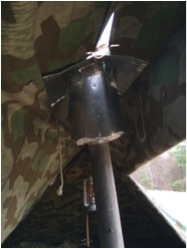 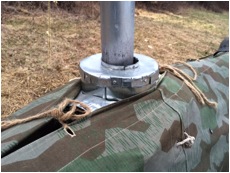 -At the top of the pipe we added a spark arrestor (to prevent sparks from flying out), and support cables to keep the whole thing from falling over. The cables are staked into the ground. 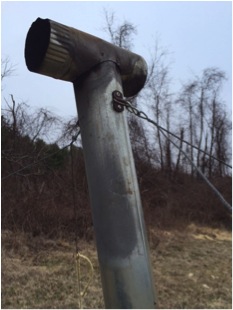 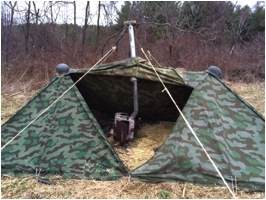 -The stove has to be elevated off the ground to keep any ground surface from burning. A few bricks solve that problem (as can be seen in above photos).
-Because the stove, and stove door, is small, wood must be cut up into small pieces to fit inside it. Sawing wood with our period saw provides for a great, and essential, period activity to any immersion event we do; there is indeed much more to being a field solider than just combat.
The stove is amazingly effective. Using straw and wool blankets as bedding, we have spent nights sleeping quite comfortably when outside temperatures plunged down to 20 degrees (-7 Celsius). The only down side is that because the stove is small, it very frequently requires fuel to keep it going.