Every soldier in the Wehrmacht was issued a paybook and identification document called the Soldbuch. Original Soldbücher commonly had additional pages pasted in to record things for which the book had no space. Here are a few which we have reproduced and used.

EQUIPMENT ISSUE
The first pattern of Soldbuch as made and issued in 1939 had a very limited amount of space on pages 6 and 7 to record the items a soldier was issued. The pre-printed item list omitted many basic items issued to nearly every soldier, such as ammunition pouches, clothing bags, or the Zeltbahn, and there was very little space provided to add these in, and no space for the many other items often recorded on these pages, such as Gamaschen or special clothing items. To fix this problem, later patterns of the Soldbuch had many more items pre-printed on these pages, along with more space to record items not present in the list. However, very many books were made and issued with the first batches in 1939, and stocks of these early books continued to be issued throughout the war. To update these books, and also to add more space in cases where these pages were filled with entries after years of service, a wide variety of inserts were made to be pasted into the Soldbuch. Some were fairly close copies of the equipment issue pages in later pattern books, others were more elaborate fold-out inserts. The equipment issues and checks were fairly frequent for many soldiers, these were conducted when a soldier was transferred, deployed to the field, or at various times when equipment reissues took place. In any Soldbuch that was carried for a few years by a soldier who saw field service, it is typical to find at least one of these inserts.

Equipment issue insert PDF
This page would be pasted at the top onto the top of page 7 in the Soldbuch, then folded in the middle with the lower half folded up and over the upper half, to enable it to fit neatly in the book (you can see the crease from the fold on the line that says “Portepee” in the scan). This particular insert shown in the scan was issued in 1945 and was the last of multiple inserts pasted onto these pages of a Soldbuch issued in 1939. I have reproduced this insert and attached it as a PDF, it is sized to be printed on A4 paper as it is slightly more than 11 inches long. If you want to print it out but don’t have A4 paper, you can get some larger sized sketch pad paper and trim it to size, 8.3″ x 11.7″.
SOAP RATION
Soap was carefully rationed and controlled in WWII. It fell under the auspices of an authority called the “Reichsindustriestelle fuer Fettvrsorgung” that controlled soap production and supply. Soldiers in the field may not have been issued soap and if they were it may not have been recorded. But soldiers in the rear- in training, garrison troops, convalescents, etc.- were issued soap and very often these issues were recorded in the Soldbuch, either with a myriad of stamped or handwritten entries, or as here, with a special insert page. This particular soldier was serving as a POW camp guard in Germany during the time indicated on this soap issue insert. 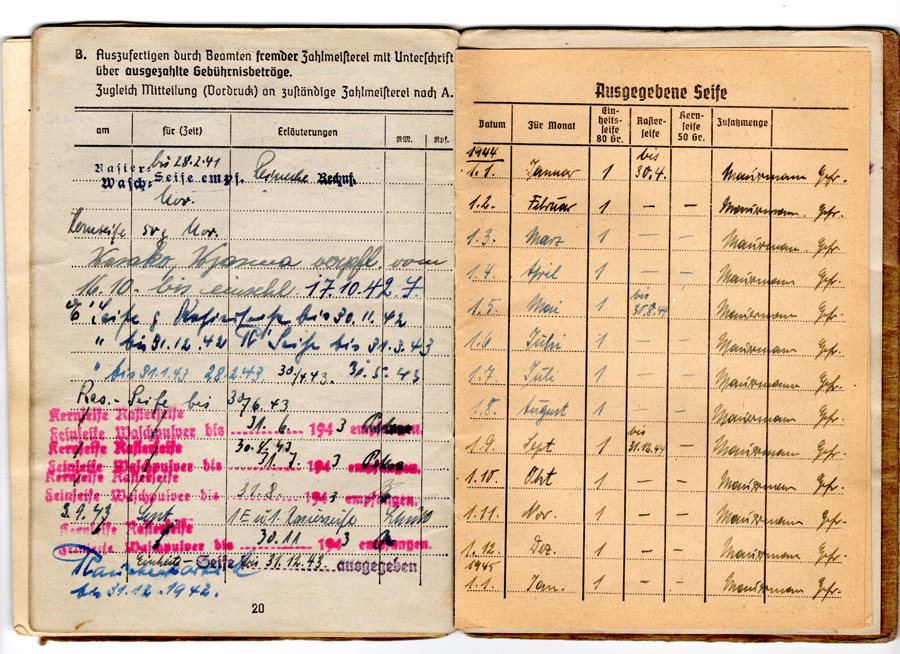 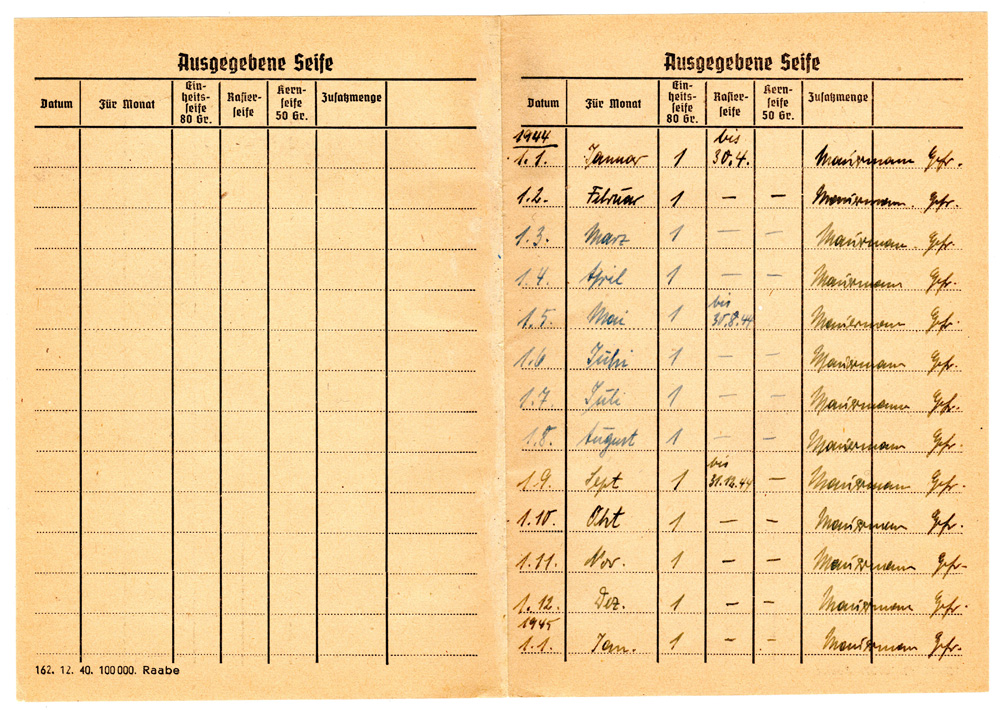 The insert is printed on both sides and folded in the middle to make four pages. It is loose in the book, it may have been glued in at one time. Only one of the four pages has entries. Both sides are exactly the same.

To fill this out please refer to the scan of the original. The first column is the date of issue, the next column is to indicate the month for which the samp was issued. The next three columns are for different types of soap: “Einheitsseife” which was an all-purpose soap suitable for whatever purpose, shaving soap, and “Kernseife” which was a type of soap with no natural glycerin that could have been used for washing. The last column, “Zusatzmenge,” was for recording additional soap issued. The last two columns are used here for the signature and rank of the soldier receiving the soap, in this case “Mauermann Gefr.”

This insert can be used in any Soldbuch for any branch. One exception might be officers as presumably they had to buy their own soap. Virtually every soldier at one time or another was stationed in the rear even if only during recruit training. The original was printed on thin natural-colored paper.

SCHIESSLISTE
Since at least WWI if not earlier, marksmanship training was recorded in a document called the Schiessbuch. During the war, the Schiessbuch was at least partially supplanted by a number of inserts intended to be pasted in the Soldbuch. 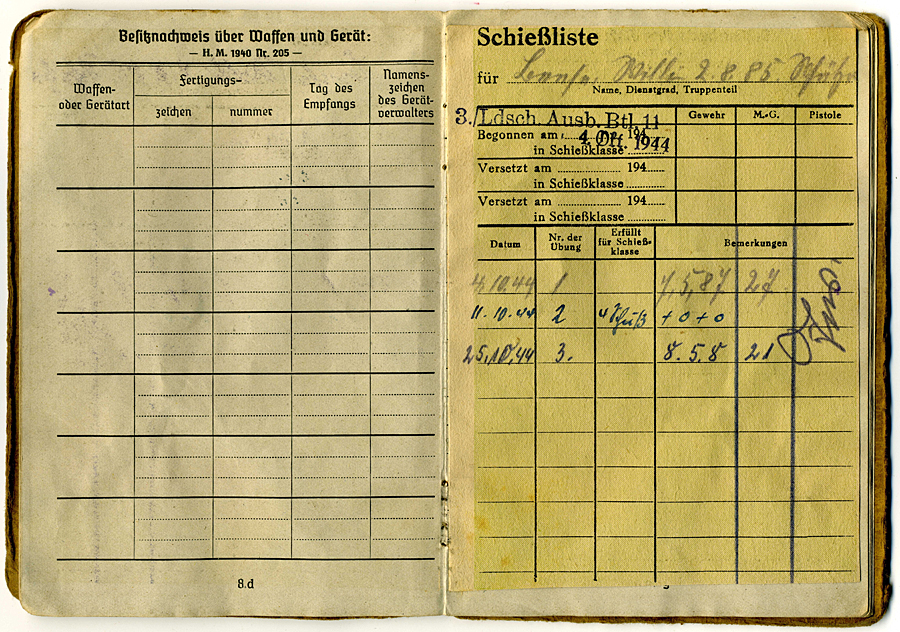 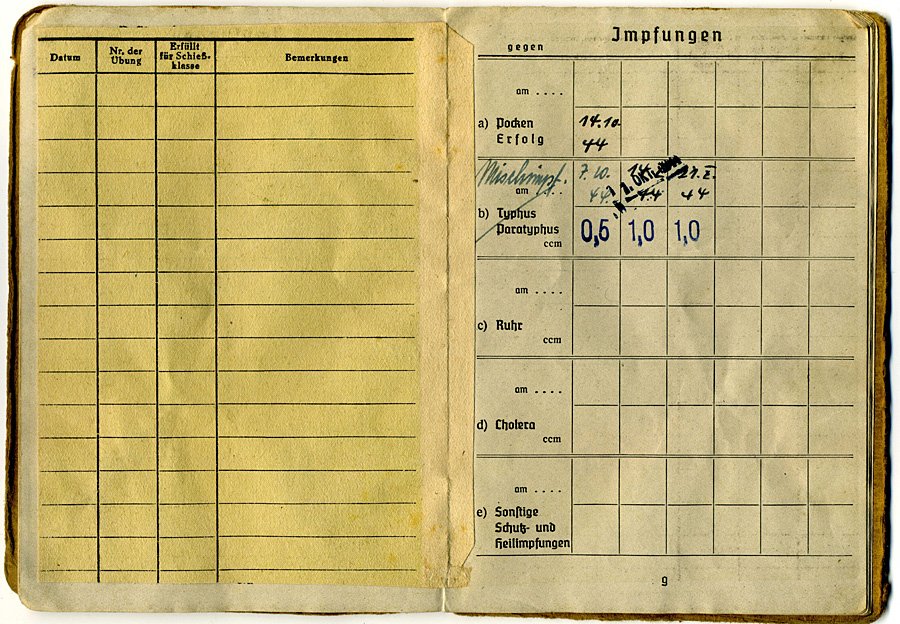 This example was printed on typical wartime paper and had a sort of green overprint that was probably intended to serve as an anti-counterfeit measure. The purpose of this insert was to record the “shooting class” of the soldier for each training session but as you can see, here, it was just used to record scores. We have reproduced this document, but without the green overprint.
Schiessliste PDF