“Esbit” is a type of hexamine-based solid fuel invented in Germany in 1936. The name is an acronym for the initials of the inventor, Erich Schumm, and “Brenstoff in Tablettform” (Fuel in Tablet Form). The Erich Schumm company (later the Esbit company) also made small, portable stoves for use with this fuel. They were advertised as a way to warm food and beverages for sport and hiking, for travel, and for workers to use on their breaks. Prior to 1945 there were a few different types of these stoves offered, of which the most commonly encountered today is the Model 9. Esbit stoves were issued to German soldiers in WWII and were also available for soldiers to buy. They are mentioned in memoirs written by Wehrmacht soldiers and also in memoirs of American troops who served in Europe and use these as captured items. It’s reasonable to conclude that they must have been fairly common among Wehrmacht troops, and they are very handy and practical items to use for living history.
The wartime Model 9 Esbit stove is made of zinc-coated steel. With use, the zinc coating is worn away or possibly burned off by the heat of the burning fuel. The bare steel is extremely susceptible to rust, and black residue from the burned fuel will build up on the inside of the stove. These are not things that were intended to be used forever, they were cheap and have a limited lifespan with extensive use. The original wartime Model 9 is now collectible and not extremely common. From a living history perspective, I think it is better to preserve the originals than to consume them and further reduce the finite number of surviving original examples. Production of the Model 9 continued after the war, with some design updates. Other nations and armies also made different types of similar stoves for their own troops, after the war. Here is a comparison showing the wartime Model 9 Esbit, and various postwar types that can be found today. 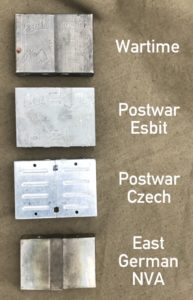 The postwar Esbit stove shown, is very similar to the wartime one. The biggest difference on the top of the folded stove, is that the wartime one has straight edges on the central closure, while the postwar one has “teeth.” 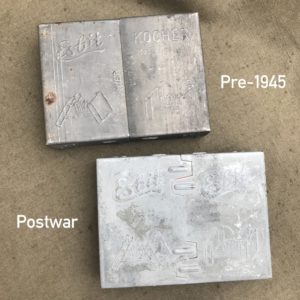 The bottom of the pre-1945 Model 9 is solid, and the postwar one has vents. 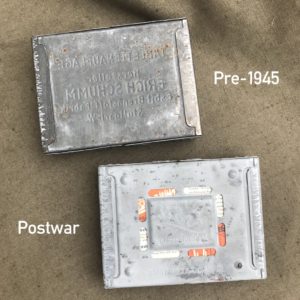 For reenactment, I personally have always carried this postwar Model 9 version, as I use my Esbit a lot and do not want to destroy collectible originals. You will notice that the “Esbit” script logo on both is identical. In the 1980s the company switched to a different logo.
The Esbit fuel was packaged in a cardboard box that fit inside the stove. Reproductions of this box are available from some reenactment vendors. 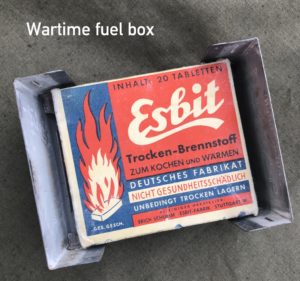 The box claims to contain 20 fuel tablets, but that isn’t really true. It contains 4 large tablets, that are scored so that you could break each tablet into 5 parts. I opened this wartime box, which probably had never been open. The tablets in the box are broken, perhaps due to inherent instability of the fuel tablets over time. 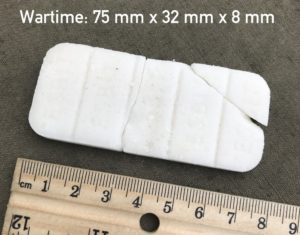 Each of the 5 sections of the original tabs is marked “ESBIT.” 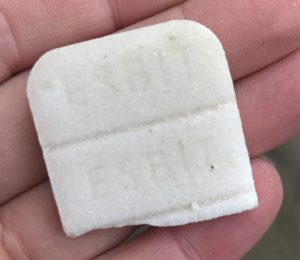 Esbit currently offers fuel in two sizes, neither of which are the same as the 75 mm x 32 mm x 8 mm wartime slabs. They make a small 4 gram size, and a larger 14 gram cube. The smaller, 4 gram tablets are similar to the sections of the original tablet, and 20 will fit in the wartime box. 6 of the larger tablets fit perfectly in the wartime box. Other types of hexamine fuel are available today and may function more or less the same as the Esbit product. I once ordered “Esbit” fuel from a seller on Amazon but got a generic, made in China product that did not function as well, in my opinion. Generally, I prefer to purchase Esbit fuel at a local shop where I can see exactly what I am buying. The modern Esbit fuel cubes come individually blister packed and when you open them, there is a smell that is quite strong. I unpack the cubes and load them into a reproduction box, the smell vanishes after a day or so. 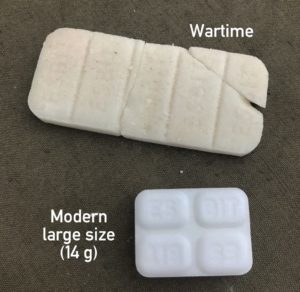 In my opinion, the Esbit is best at heating prepared food, rather than actually cooking. Esbit stoves and fuel are great at warming soup or other canned foods. For reenactment, if you plan to eat out of cans, you can consult this list of Wehrmacht steel ration can contents for some meal ideas.
It is also possible to actually cook meals with the Esbit as well. With enough fuel and time, you can boil water and keep it boiling. One recipe I like to prepare with my Esbit stove is “Ölsoldaten” (Oil Soldiers), from the wartime Wehrmacht cookbook “Östliche Speisen nach deutscher Art.” The recipe in the book: “Fry sardines in their own oil while adding finely chopped onions. Drizzle with lemon juice as a dressing.” It is further noted that “Tuna fish in oil can be prepared just as the canned sardines.” I find the tuna version of this to be delicious.