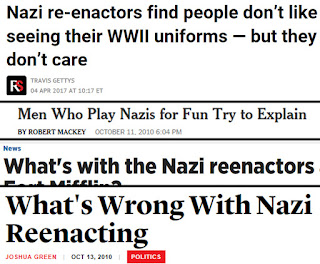 You need to proceed from the assumption that they are going to call you a Nazi.

Over the years, I have done very many interviews for television news broadcasts and other TV programs, newspapers and other print publications, and radio broadcasts. With regard to reenacting specifically, I have been quoted in a number of newspaper and magazine articles. In 2011, I participated in a WWII reenactment at which another reenactor was badly injured, after which I was interviewed for the local CBS television news broadcast- an interview later quoted in national and international news coverage of the accident. The purpose of this post is to share my perspective and to make suggestions based on my experience. I am not a professional in public relations and do not claim to be an expert, but I have noticed, over time, some clear patterns with regard to media coverage, favorable or unfavorable.

Why talk to the media at all? It’s a valid question. Especially in our current political climate in the USA, news reports about WWII reenacting have a better-than-even chance of being negatively slanted. A case can certainly be made that at this point, the less the average man on the street knows about reenacting, the better. My personal opinion is that there are several potential benefits to carefully considered interactions with journalists. Even decidedly negative news coverage may kindle an interest in someone who might otherwise never have considered reenacting. But either way, in the final analysis, refusing to speak to reporters won’t stop them from writing and broadcasting about reenacting. The following tips have served me very well in interactions with reporters.

-Reporters are looking for sound bites. Before the reporter talks to you, they probably already know what their piece is going to look or sound like. They probably already have a fairly solid idea of the exact sound bite or brief quote they want you to provide. Try to speak in short sentences and answer their questions in as concise a way as possible, they will appreciate this and there is also less of a chance for them to get you to say something they can take out of context. Don’t be afraid to repeat your talking points using different wording. You want to give them sound bites that put a positive spin on living history but more importantly, you want to deny them any negative or damaging quotes they may be looking for.

-Reporters will lie. Don’t believe that they are writing a positive piece that will make you look cool, even if they give you every assurance. Definitely do not ever make candid, “off the record” remarks. In every interaction with them, keep your guard up.

-Do your homework. If you are contacted by a journalist, look at their other work, look at the publications or broadcasts they work for. If they work for a news source that leans toward clickbait articles or lurid headlines, there is every reason to assume they will negatively sensationalize you however they can. You are probably better off not working with such an outlet. And regardless of your personal political leanings, news organizations that have a “progressive” slant should be regarded with a maximum of caution. Any news coverage by such a source is likely to be negative.

-Use a fake name. You can’t know how the reporter might twist your words. You might even find that the article uses your photo, but the only reenactor quoted in the text is some ignoramus making statements you want nothing to do with. A lot of news content goes online and could be there forever. You don’t want potential employers or others finding your name in a hit piece about Nazis, if they do a Google search. Don’t give your impression name, it’s too obvious. Just pick a regular, typical, common and believable name. They won’t ask for your ID. They just need someone to provide the sound bites they need.

-Keep it mundane. You don’t want to get caught up in flowery language about higher purposes of reenacting. They can make you look stupid by juxtaposing your words with professional educators and historians, or members of other groups who will contradict you. Try to keep it fact-based and basic. Don’t claim to be an educator if that’s not your profession. You can talk about how reenacting is educational for participants, you can point out that reenactors work with accredited and legitimate historical sites and provide visual props for historic sites. Try to speak in broad terms.

-Don’t get involved in moral judgments or posturing. Wehrmacht soldiers were men of their time. Do not praise them, do not condemn them. Avoid using words like “bad guys” or “evil.” You want to stay morally neutral. Definitely do not ever bring up Allied war crimes or make any kind of better/worse comparison, you cannot win with this. If the journalist specifically asks about Allied war crimes, try to find a way out of giving any usable answer. You need to be acutely aware of possible attempts to make you look like a revisionist or denier. If the reporter brings up the Holocaust you have to give some kind of very basic response. “The crimes and wartime atrocities of the Nazi regime are well-documented. The enormity of the human tragedy is one of the reasons why it is so important to commemorate and to remember this period of history.”

-Don’t do politics at all. None. You are an amateur historian and not a politician. You cannot overstate this. Simply refuse to answer any questions about modern politics. Keep the names of modern politicians out of your mouth completely.

-Don’t tokenize people. Do not point out that people in your group, or in your life, are ethnic minorities, or Jewish, or gay, to demonstrate that you are not a racist or bigot. It has the opposite effect. Don’t ever do this. But ESPECIALLY don’t do this talking to a reporter.

–-Don’t conflate reenacting with actual WWII service. Never say “we” or “us” when talking about WWII soldiers.

-If you are out in public as a reenactor, you are a public figure. It’s OK to politely decline to speak to a reporter. But if you are going to freak out and hide your face if a reporter is shooting photos or video, you really should not be going to public events. If you are doing something where spectators are there to see you, the potential of being on the news exists. Participating in a public event is a choice that you make. Acting rude or indignant towards reporters makes us look bad.

-Look at the big picture. You are making statements not only for yourself, or as a representative of your unit, but on behalf of all of reenacting. Keep it professional, but try to talk up our hobby and be a cheerleader for it in whatever small way you can. Definitely don’t disparage reenacting in any way. And don’t be afraid to say it is fun.

-Trust your gut. If you don’t feel confident, walk away. Leave it for someone else.