Skip to content
How the Westwall ring came into being 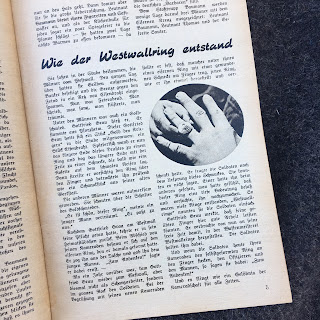 They sat together in the rooms, the men of the Westwall. All day, they had dug trenches, fortified bunkers and covered the border against the enemy with a net of iron wire. Now it was a free evening. Some wrote, some sang, some whispered, some dreamed.

Among the men was also a goldsmith. Gottfried Grau, he was called. He came from Pforzheim. This Gottfried Grau had brought a piece of “warrior’s gold” into his room with him: a piece of iron wire. Like a toy, he wound the shorter end of this wire into a ring, and bent the longer end with a file into a spiral, which soon lay like a rosette on the narrow ring. Then he put the ring on his finger and regarded it with scrutiny, like a piece of jewelry from his old workshop.

The other men started to notice this. They looked over the shoulder of the goldsmith.

“It is beautiful, this ring,” a young man said dreamily. “It suits us.”

After Gottfried Grau finished his duty on the Westwall, he returned to his home city. As he bid his comrades farewell, he thought about the iron ring he had made. He took it out of his pocket and gave it to the young man. “In memory!” he said seriously.

When a year was over, Gottfried Grau came back to the Westwall, but this time not as a trench worker, rather in the gray jacket of a soldier. When he greeted his new comrades, he noticed that some of them wore an iron ring with a wound spiral. Such a ring as he had once made and given as a gift. He asked the soldiers about the origin of this jewelry. They couldn’t say. Someone had seen someone else wearing it, and one got the feeling that this ring had a deep meaning and tried to make one. So arose many such rings, “Westwall rings” as they were simply called by the soldiers.

Gottfried Grau knew that his trained fingers could do good work here. From now on he spent his free time in the weapions maintenance room, making Westwall rings. The soldiers helped him with it.
And when today, when they put a self-made ring on the finger of their comrades, the officers and the men, they say then: “In memory!”

And it sounds as a promise to cameraderie for all time. 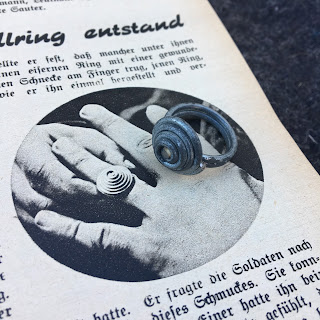