Skip to content
by Gregor Fleischer and Chris Pittman

Entrenching tools have been a general issue item for almost every army since the First World War. The German army of the Second World War was no exception. Pre-war the Wehrmacht adopted a flat blade, square head shovel with a short handle that could easily be carried by every soldier. This was essentially the same pattern as the shovels used by the German Army during WWI. This pattern of shovel was produced and used until the end of the war.

Around 1940 a more modern entrenching tool known as the Klappspaten, or folding spade. The Klappspaten had the ability to be used as a traditional spade or a mattock. This allowed for easier digging with such a small shovel. The Klappspaten and flat blade spade served side by side in the Wehrmacht until 1945. The carrier for this pattern of shovel was produced in both leather and Presstoff.

The following photos illustrate differences between original WWII German shovels and similar looking foreign made shovels that are sometimes confused for Wehrmacht issue. 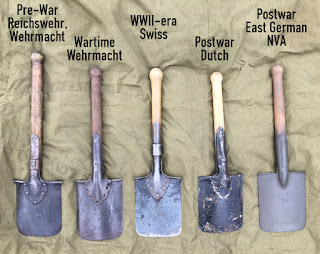 In the above photo, the example at far left is a German made one from 1934. It features a riveted blade and riveted “ears” at the top of the blade.

Second from left is the standard Wehrmacht type that appeared before the war. This example is dated 1945. It features a welded blade and folded over “ears.” Some shovels in this pattern were also made with a riveted blade.

At center is a Swiss shovel. The “ears” at the top of the blade are curved and bent but not folded over as with the Wehrmacht type. This shovel is almost identical to the WWI French type.

Second from right is a postwar Dutch shovel. With its folded over “ears” and welded blade, it is nearly identical to Wehrmacht issue.

At far right is a postwar East German army shovel. The “ears” are slight and the blade is neatly welded with no flange. There were other East German models including a riveted type.

The most immediately noticeable diagnostic difference among these various shovel types is the top of the blade. The following pictures show the different forms and indicate the origin of each. Some forms were used by different armies at different times and this may not be a comprehensive list as it does not take into account less commonly encountered types or manufacturer variations. 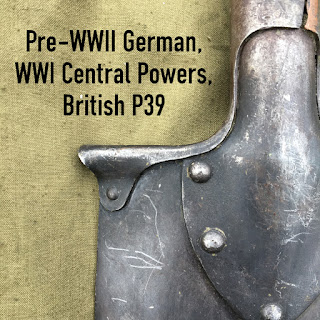 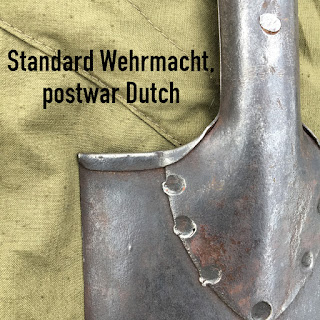 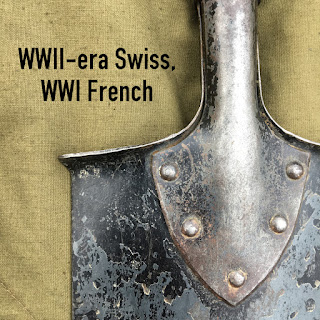 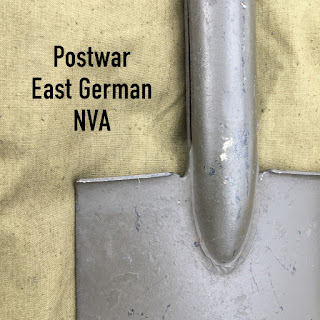