In a previous article we discussed artificial “aging” of reproduction items used for reenactment as a way to make them look more like originals. The term “aging” as used here means applying artificial means to create the appearance of something that was extensively worn and used over a period of time. It does not mean trying to replicate the appearance of something that is simply old- in fact, there is no way to achieve that, because the passage of time, alone, does not necessarily leave any trace on an object. Here is a case in point: 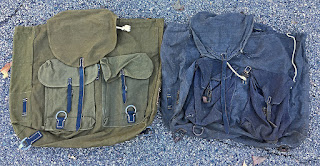 Both of these packs were made within a year or two of each other, circa 1943-44. The green one is in brand new factory mint condition. The leather is smooth, straight, unblemished. The stitching and drawstring are bright white. The fabric is pristine. The metal hardware retains all of the original paint. This rucksack was never issued or used. The passage of more than 70 years has not altered the appearance of this object in any way whatsoever. Compare that to the blue pack. The leather is stretched out, the straps have curled up. The paint is worn away from the hardware and the metal has rusted. There are large and small holes and quite a few careful hand-sewn repairs. The fabric is frayed and torn, the bottom is stained. This is a pack that someone used a lot, and it shows. It is not time that makes an item look like this. It is wear and use.

For field soldiers, war was a harsh reality. The rigors of their existence took a toll not only on the fighting men, but on their uniforms and equipment. Items worn and used in these demanding conditions very quickly took on a very obviously used look. This look became a recognizable characteristic of soldiers in the field. It’s why costume designers creating wardrobes for war movies artificially distress items used as props. It’s a visual thing.

There are reenactors who believe that the best way to create an impression of a veteran field soldier is simply to wear the uniform and equipment until it appears visibly worn. Their mantra is, “Just wear it.” Is that reasonable? Reenactments are usually only a weekend long and few hobbyists attend more than one event a month. Some events may include long marching, digging field positions, or other arduous activity, but others may recreate garrison tasks that incur no serious wear on gear. Soldiers in WWII were wearing their uniforms every day, sleeping in them, marching for miles, living in holes in the earth. They were fighting for their lives. Does reenactment put an equivalent amount of wear on gear? Not a chance. But even if it did, a reenactor would have to go to events each month for several years to achieve the look of something continuously worn in the field for just a few weeks. A soldier wanting to present a realistic visual impression of a soldier who has been living in the field for some time may not want to wait years to look believable. That is the purpose of aging. It’s not about making something look old, but it is necessary if new items are to be used as stand-ins for objects that, in reality, were very visibly used.

It is true that some soldiers were fortunate enough to be issued new items. Others had to make do with reissued uniforms and equipment. But even the new stuff, in those conditions, did not look new for very long at all. The visual aspect of reenacting is crucial, hobbyists strive to prevent a convincing appearance. The “just wear it” approach is great if one is portraying a recruit being trained in a garrison. But to take an impression consisting of all brand-new items, subjected to a year of reenactments, and state that the impression being portrayed is of a guy who has been living in the field for weeks or months? Frankly- I’m not convinced.

How many years of “just wearing it” would it take before a reproduction Rucksack looks like the blue one in the photo above? How many decades?