With very few possible exceptions, every issue type wool field blouse made for the Heer and Waffen-SS in World War Two was made with 19mm pebbled buttons for the front placket, shoulder straps and pocket closures. The buttons used for the shoulder boards and pockets and front placket were all the same size, and all field blouses were made and issued with the same size of button. The issue type field blouse buttons were all convex, with a hollow reverse.

Before WWII, the Wehrmacht used aluminum pebbled buttons. At some point near the start of the war, zinc replaced aluminum in production. Near the end of the war, steel buttons began to be produced. This same progression can be seen with dished equipment buttons and some other types of uniform and equipment hardware: aluminum before the war, then zinc, and steel in 1944-45.

The Reichswehr used buttons made of nickel silver, which is a nickel alloy with a slight yellow cast. It is possible that some early Wehrmacht uniforms may also have used nickel silver buttons, with a field gray painted finish if used on field uniforms. Some pebbled buttons were also produced in Bakelite, though these are not common and are not typical on any uniform type from any period.

These same hollow backed field gray 19 mm pebbled buttons (among other types) were also used on other types of clothing, including camouflage clothing and HBT uniforms.

This is an early aluminum button on an overcoat from the 1930s. You can see that it has a very thin, very smooth field gray finish. This may be paint or it may be a type of anodized finish. 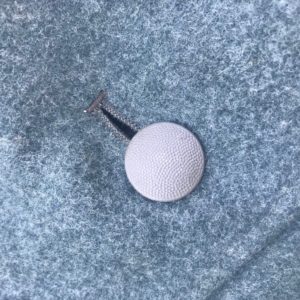 This is an early field gray painted aluminum button on an M36 field blouse. The Germans were not able to standardize color shades for their uniforms and equipment. Buttons used on the field blouse were painted “Feldgrau” which initially was a rainbow of green shades ranging from pale yellowish green, to dark forest green. 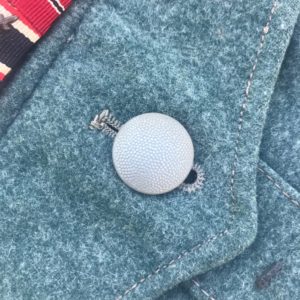 This is an aluminum button, with traces of a dark-colored painted finish, factory sewn on an M43 field blouse made of captured Italian uniform wool, probably in 1944. Pre-war patterns of uniforms, insignia and equipment were issued and re-issued as needed, as long as stocks existed, until the end of the war; the same was true with buttons. 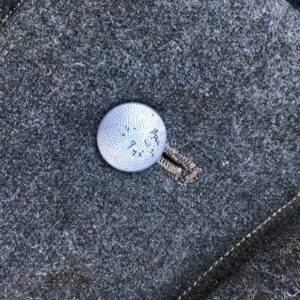 Zinc buttons became very common during the war. This one is on an M43 tunic from 1944. 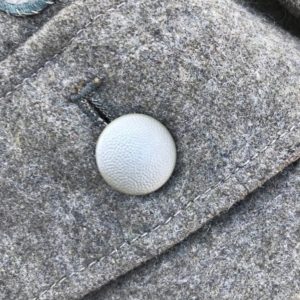 This zinc button on a worn M44 tunic has very large pebbling. If you look closely at these photos you will note many variations in the size and detail of the pebbling. This was simply manufacturer variation. 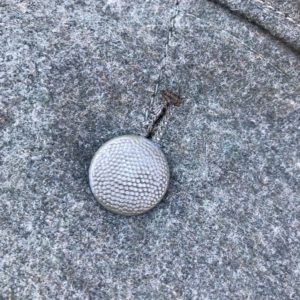 A pristine zinc button with a light-colored paint finish, on a barely used M42 overcoat from 1942. 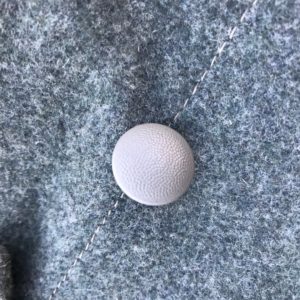 This well-worn M43 tunic has steel buttons, with nearly all of the original field gray paint worn away. These buttons are magnetic. 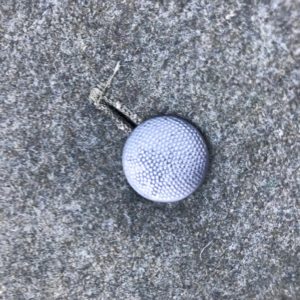 Starting some time in 1943, some types of equipment including some belt buckles and some pebbled buttons began to be produced in a blue color called “Einheitsblau.” Supposedly, this was to simplify production by enabling items for all branches of the military to be finished with the same blue paint. This is an Einheitsblau button on an M43 tunic. Note the lack of detail to the pebbling. 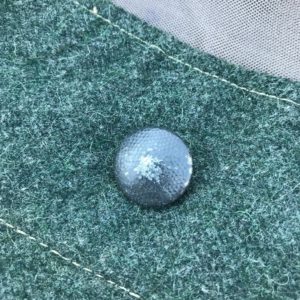 The button above is an example of what was likely the final variation of wartime button. On typical buttons, the pebbled metal face is crimped onto a convex metal plate, which is fitted with a shank. This button is a late war type with the pebbled part crimped onto an S-sing of the type previously used to affix buttons to HBT and tropical uniforms. 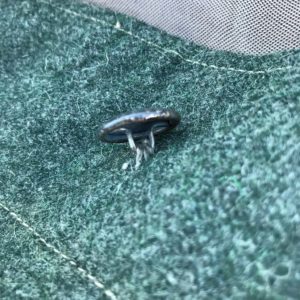 These aluminum and zinc buttons, of the standard type, were recovered from the Stalingrad battlefield and are representative of the mix of materials one would expect to see in the mid-war period. Many of the buttons bear manufacturer markings. Among those pictured here are products of Assmann & Söhne in Lüdenscheid, Berg & Nolte in Lüdenscheid, Brüder Schneider in Wien, Richard Sieper & Söhne in Lüdenscheid, and Funke & Brüninghaus in Lüdenscheid. These were all companies that made other metal bits for the Wehrmacht, including badges, belt buckles and metal insignia. 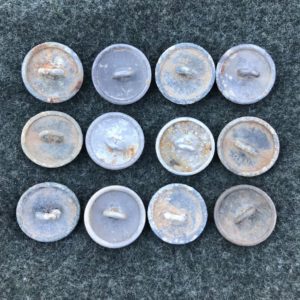 Different types of buttons with different finishes were used on other types of uniforms, such as parade uniforms, which had buttons with a bright silver finish. Buttons with a solid reverse were sometimes used on tailor made officer uniforms that were not intended for field use.

At the time of writing (2020) near-perfect copies of the standard 19mm hollow back pebbled metal buttons used for Wehrmacht field blouses, have been manufactured for years. Reproductions offered by a number of suppliers are visually identical to the originals, especially on the front. The very wide range of colors and shades used on original buttons makes it hard for the makers of the reproductions to get this wrong. At this time, applying original buttons to a reproduction field blouse cannot reasonably be stated to add visual realism, from a living history perspective.