“Spiel mit!” (Play along!) was a set of games introduced during WWII and packaged in a small, flat box that was well-suited to being mailed. It was available for anyone to buy, soldiers could have bought it, or people could have bought it and mailed it to soldiers in the field using the military mail system. It was a set of 5 games: chess, checkers, Nine Men’s Morris, and two military-themed games, “Melder vor!” (Messenger forward!) and “Stosstrupp greift an!” (Assault troop attacks!). The game board were packaged together with cardboard and wood or plastic game pieces. 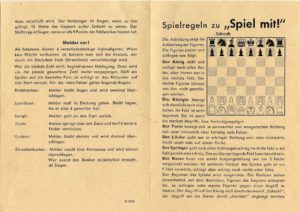 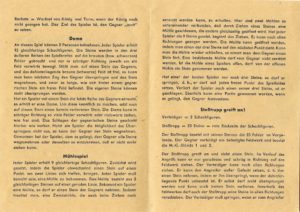 The two military-themed games are played on one double-sided game board, with one game printed on each side. The board is made of lightweight card stock, folded in the middle. These games were intended to be played with the game pieces that came in the box, but they can be played with any kind of small tokens or markers- four different pieces for “Melder vor!” and 25 pieces for “Stosstrupp greift an!” (23 of one type and two of another).

“Melder vor!” is a game for up to four players. 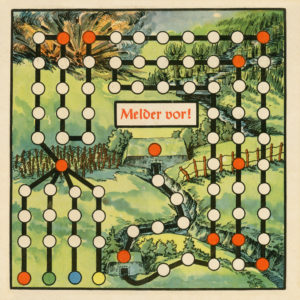 The game is played as follows:

“As game pieces, use 4 different colored pieces. If no die is available, you can use the spintop, which is made complete with a little piece of wood (like a match stick).

Whoever rolls the highest number, begins his trip as messenger. He advances the number of spaces that he rolled. If the player lands on an occupied field, he sends the other player back to the start. For the red spaces, the following rules apply:

Wire entanglement: The messenger remains where he is and his turn is skipped twice.

Blocking fire: The messenger must take cover. He stays where he is, until he has rolled a 6.

Swamp: The messenger goes back to the start.

Fence: The messenger jumps over the fence and advances 6 spaces.

Trench: The messenger is stuck in the trench and his turn is skipped three times.

Intermediate bunker: The messenger takes a break to catch his breath, and his turn is skipped once.

Whoever is the first to reach the bunker in the center, is the winner.”

“Stosstrupp greift an!” is a game for two players. 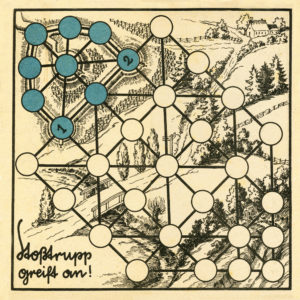 The assault troop occupies the 23 spaces in the foreground with his pieces. The opponent defends his fortified field position and occupies machine gun positions 1 and 2.

I scanned the original board and edited the graphics to remove the folded crease at center. It is very easy to make a reproduction of this board, and coins, buttons, stones or any kind of small objects can serve as expedient game pieces. To make the game board, print out the files in the links below on 11″ x 17″ paper. I went to a local office supply store and had them print the graphics on their color copier, so the ink is waterproof. Then, glue the prints to either side of a 9 inch square piece of card stock. Trim the card leaving a narrow border around the printed black border on one side or the other, and fold it in half, horizontally, with “Melder vor!” on the outside when it is folded. Here are the .pdf files: