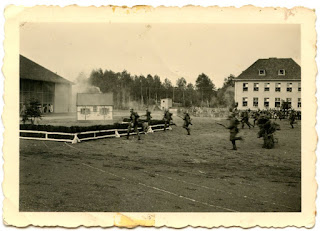 Sicherungs-Regiment 195 focuses mostly on immersion events, where we try to recreate the daily mundane life of WWII German security troops. We also attend living history events where we interact with the public. Although we are not educators, we try to share what we have learned with people interested in the time period. Participating in living history events allows other history enthusiasts to see and handle the equipment we use, and we try to craft interactions that have some educational value. For instance, a recreated field office can lead to a discussion about the importance of bureaucracy in a totalitarian regime. Further, as Sicherung troops, our under-equipped, stripped-down approach often serves as a stark counterpoint to other more sprawling displays which may offer plenty of “eye candy,” but little sense of how field soldiers of the era actually lived.
Public battles, though, are a different story. Simply put, our unit does not participate in them. Ever. We will not perform mock battles as part of any “edutainment” scheme. It is our view that public battles can never be realistic, and that they do history a disservice by presenting a sanitized and glorified caricature of combat. Promoters who claim that the public can see what WWII looked like, by watching a public battle, are simply being dishonest. Spectators, who walk away from these spectacles believing that they have seen something realistic, have unfortunately been misled. WWII combat was not something that was suited for spectators, and can not be adapted for “edutainment” without an overwhelming vast compromise that destroys any attempt at historical integrity. The result is, at best, a clumsy cartoon; at worst, public battles put a glorious shine on mass violence and loss of life of an enormous scale. If a realistic depiction of a WWII battle could be created, any spectators would probably run away screaming, and certainly would not be offering up applause at the battle’s end. Individual members of our unit may have different personal views, and may choose to participate in public battles, with other units for their own reasons. But Sicherungs-Regiment 195 has chosen not to support public battles as a unit. Our policy is to focus on more productive, positive, realistic and educational efforts when interacting with spectators.