In our portrayal of security troops, our main activity in the field is setting up a Feldwach, a guard outpost. Generally, we guard important roads or other targets that could be subject to sabotage or attack by partisans. What follows is a translation from the German Army manual H.Dv. 130/2a, “Ausbildungsvorschrift für die Infanterie, Heft 2a: Die Schützenkompanie,” from 1942. This material is intended for rifle squads in a regular Infantry unit, no doubt there were differences in how the Feldwach was set up by undermanned, underequipped security forces in the rear. But the general principles of how such outposts were to be arranged likely still applied, and we attempt to conform to these principles whenever possible, though we are limited by our lack of manpower and equipment.

The Feldwach when serving as a forward post is often in Gruppe strength [squad strength, 8-10 men]. It can also be formed with stronger security forces.
The Gruppe as Feldwache helps protect resting troops from surprise or attack by the enemy.  They prevent breakthroughs of enemy scout troops. Thrusts of motorized enemy forces, especially armored forces, are defended against.
If no other orders are given, the position must be defended.
The Gruppe as Feldwach is always reinforced by anti-tank weapons, and often by heavy machine guns, light or heavy mortars, and/or Infantry engineers.
They are generally equipped with flare pistols, a bicycle for a messenger, hand grenades, and armor-piercing ammunition in drum magazines.
They can be supplied with entrenching tools, materials for obstacles, Tornister [field packs] and rations.
At night, in weather conditions with poor visibility, in terrain that offers limited observation, and when the enemy is near, the number of Feldwachen is increased. The terrain between Feldwachen is observed by scout patrols.
The position must be chosen so that good observation and fields of fire can be achieved. Mostly, the position lies along a road or another path.  The possibilities of movement for enemy armored forces or vehicles must be considered. Proximity to terrain obstacles or use of terrain that is unsafe for tanks is to be strived for.
Construction of a battle-ready roadblock on the road to be secured increases possibilities for defense. This roadblock must be dominated by the fire of weapons, especially anti-tank weapons, and it must be able to be defended.
The position, when possible, must be chosen so that it is concealed. A concealed path that leads to the securing troops makes it easier for messengers and for reinforcement in case of enemy attack.
The Gruppe must know their task. This includes the field of fire, the location of strongpoints, and the time to open fire.
The Gruppenführer [squad leader] sets the Gruppe up in such a way that the field of fire is controlled by their weapons. For this purpose the Gruppenführer stays with the light machine gun. He arranges the rifle positions on one or both sides of the machine gun.
The Gruppe strongpoint is made up of multiple foxholes. They should not extend over more than 30 meters. Each foxhole is occupied by 2 or 3 riflemen.
The foxholes are irregularly staggered, 4 to 8 meters apart depending on depth. As a further step they can be connected by shallow trenches, or connecting trenches.
If the machine gun has the task of firing at long ranges, it should fire whenever possible from one or more alternate positions. Concealed paths between alternate positions are a prerequisite.
If no enemy activity is expected during construction of the positions, and if time is available, ongoing reconnaissance and preparation can go ahead of the construction.
The construction is mostly limited by camouflaging and arrangement of the position and by the construction of a battle-ready roadblock.
For observation of terrain on which an enemy would approach, for local protection of the roadblock and of anti-tank weapons as well as for their own security, the Gruppenführer can set up one or more guard posts in strengths of 1 to 3 men, depending on situation and terrain.
The remaining members of the Gruppe, after the position is constructed, remain battle-ready in the defensive positions. If the situation allows, they can take cover in the rear of the defensive positions.
During the day, the guard must observe the terrain over which an enemy would approach and especially the roads leading to the enemy and the areas between them. He himself must stay out of sight of the enemy.
Occupation of high ground is advantageous for observation and listening. At night, and in weather conditions with poor visibility, the guards mostly remain in immediate proximity to a road or other path.
The guard is equipped with binoculars and a method for signaling, and often also with a machine pistol.
Smoking can be permitted. It is recommended that the guard sit or lie down if possible. 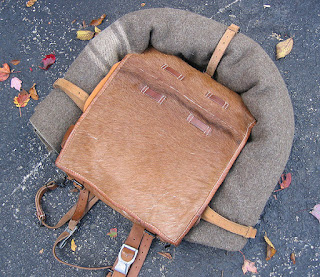